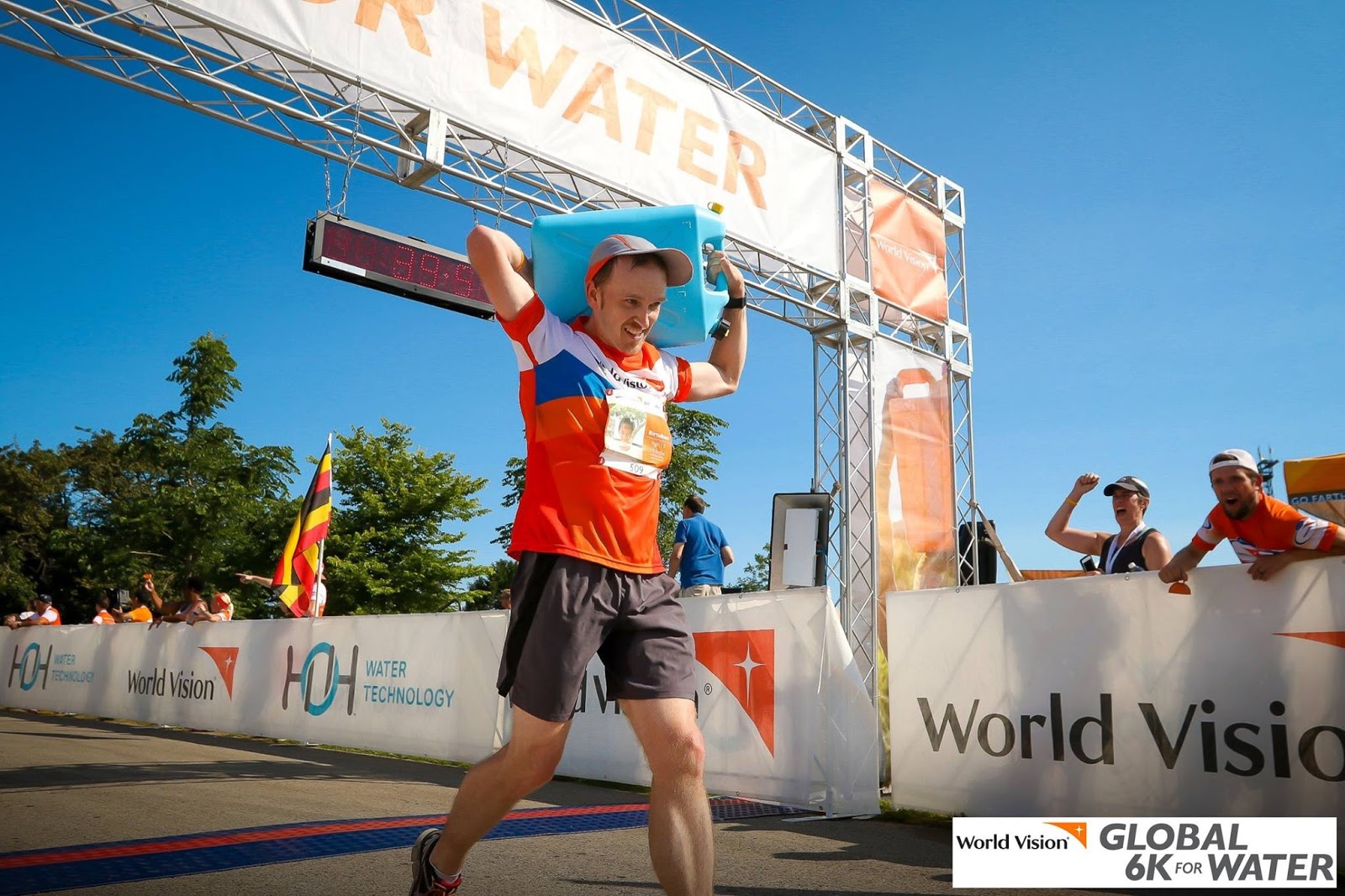 In July 2017 I wrote my last post about running. I wrote of Goals and of Cost, of Declaration and Revolution. In the intervening months I carried a 40 lb jerrycan of water through the Global 6k for Water in Chicago. I trained for and ran my second Chicago Marathon, propelled onward by an overwhelming crowd of supporters. I welcomed my wife across her first marathon finish line, followed by my sister Tracy. But most importantly, with your help we raised over $10,000 for clean water - that's over 200 lives changed forever by a humble gift of $50, to bring them access to a clean, fresh well and end the cycle of hauling surface water carrying parasites and disease and risk of death. Those 200 lives were well worth every mile. But there's more to fight for.

Then came a season of recovery. Many of you haven't heard from me for over a year, because I didn't run a Marathon last year. But that doesn't mean I stopped moving. During the cool early months of 2018, I met weekly with a group of guys to share community on the trails in the frosty Saturday morning hours. Later my wife and I celebrated our anniversary running another Global 6k for Water together, and I trained for and ran the Chicago Half Marathon, for which some of you generously supported Team World Vision clean water projects. But of much greater significance, I got to support Tracy as she ran back-to-back marathons in Chicago and New York to challenge friends and family to sponsor children through World Vision. In both cases, I proudly joined the crowds of spectators and yelled myself hoarse to cheer her on, celebrated her victories, empathized with her exhaustion, and bought her ice cream. Tracy won't stop there. My story doesn't stop there. There's more to fight for.

So it is with great honor and hope that this September I will run the 2019 Berlin Marathon.

What's your Battle Cry? Maybe you've never asked yourself that question with those words, but you've certainly considered your charge. Do you feel accountability for the change you want to see in this world? Maybe you know there's need, you know there's hurting, but you're frozen, hogtied by the immense scale of the problems of this world. But I say: you have the very real power to act and create change. Find your action and make it your Battle Cry. Maybe your role is not to run - that's my Battle Cry. But you can certainly act. There's more to fight for, so stand up and act, because life is too short and too precious for inaction. TODAY I RUN. What's your Battle Cry?

Today, this very moment, I can introduce you to a child who needs you. If you're looking for YOUR BATTLE CRY, maybe this is what you act on. Standing up for this one child is simple and probably easier than you'd like to admit, and yet... to this one child, it can quite literally mean the world. So if you feel an urge to move, follow it. Stand, act, CRY OUT!

CLICK HERE to start your charge. And thank you dearly for your support.

Popular posts from this blog

Bruised Not Beaten: A Berlin Retrospective

April 06, 2020
Just over a year ago, my sister Tracy ( @running4twv ) and I announced our entry into the 2019 Berlin Marathon. And last Sunday marked the 6 month anniversary of the race itself. It seems somehow impossibly distant and remarkably recent at the same time. And, aside from writing a letter to my supporters at the end of the year, I have really taken very little time to reflect on the experience. Probably to an unhealthy degree. Because if I'm honest with myself, Berlin nearly got the best of me. That's hard for me to grapple with. I had a great training season. The Summer was mild, I wasn't really pushing for a pace goal - instead I was really enjoying running with friends and family. And yet, my long runs continued to improve and I was feeling great! For the first time since I started running, I got into the rhythm of hitting negative splits, sometimes managing to put in a final 2-3 miles that would get me winded in a 10k. I found that I really enjoyed the feeling of kee
Post a Comment
Read more

It Starts with a Spark

August 19, 2019
How much power is in a spark? There are many, many things that you can Google and get the answer you need within seconds, but I had to do a ridiculous amount of searching and math to get a halfway respectable answer to this question. But let's err on the high end and say that a particularly large and hot steel spark can represent up to 11 joules of energy. It just so happens that 11 joules could power an energy-efficient 10 watt LED light bulb (a typical lamp) for just over 1 second, if I did my math correctly.* There's nothing terribly powerful about turning on a lamp for 1 second. Not much can be done in the darkness with 1 second of lamp light. But in 2018, a rancher in California hammering a metal stake struck a single blow that produced a single spark that ignited a patch of grass that spread to a tree that spread to a forest and became the largest wildfire in California history. By the end, this fire had burned for over 100 days and covered 640 square miles. And (h
Post a Comment
Read more

Community of the Heart

September 17, 2019
12 days. 12 days and I'll be recovering from my 3rd marathon in the shadow of the Brandenburg Gate in Central Berlin. This will probably be my last post until then, but I felt like I had something I needed to say. This past weekend I hosted an event with my friend and World Vision running buddy, Al Prete, at a local venue called Exit Strategy. We worked hard to create a welcoming space with fun activities and an energetic atmosphere. But all the planning would have been a huge waste of time without people showing up - people saying "We care about you, what you're doing, and what you represent." And they did show up. We were blessed with a great turnout. And as I moved about the crowd, I was struck by the array of groups represented there, all coming together to make up my Community. But my Community doesn't end there. It used to, and not all that long ago. When I first started running for World Vision, I came to realize that my life priorities had tightened
Post a Comment
Read more

If I can't wear my heart on my sleeve, I'll wear it on my back. Every step I run this season is dedicated to a kid who needs a sponsor. A kid who needs friendship. A kid who needs hope. So I will be carrying them with me through the heat and the sweat and the miles. All you need to do is say "yes"! - PM me to talk about Nuradis. #todayirun #10miles #marathontraining #thatheat #somuchsweat #worthit #teamworldvision [Thanks to @al.prete.1 for the run!]