UBUNTU [ū·BHŪNT’·ū]: n (Zulu) An African philosophy often translated: “I am, because we are.”

This simple but profound phrase was adopted as a mantra of sorts for Team World Vision this year. When I heard it, I couldn’t think of a better way to describe 2020. There is little I could say about the “pandemic year” that hasn’t been said already, or at least felt or experienced by anyone I might be speaking to. The aches and pains, frustrations and anxieties of the past year are somehow astoundingly universal and intensely personal all at once. But I might have some license to speak to how this idea of ubuntu – community as identity – stirred in me these past twelve months. 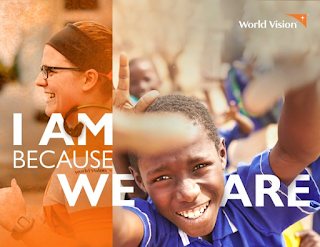 I sit here writing on the anniversary of the weekend my town completely shut down, as the severity of the outbreak could no longer be ignored. I had already committed to running Hood to Coast (a 200-mile team relay in Oregon), and was soon to commit to the Chicago Marathon as well, oblivious to the looming reality that neither race would survive the pandemic. I had no idea at the time that I would run every. single. mile. training for those races completely alone – and I'm talking over 1,000 miles that I ran in 2020. But losing that in-person activity, the comradery of pushing through those miles with friends, did not mean I had lost my community. That would be reinforced time and time again throughout the year. 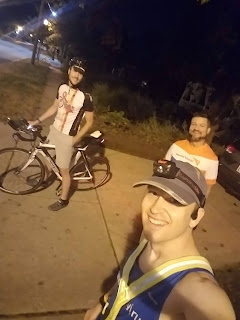 Last year was hard for me, as it was for most of you. But in communities that rely on World Vision for access to water, medical supplies, educational resources and so much more, losing Team World Vision’s funding could have set them back years. BUT, the Team World Vision community refused to relent. World-class professional races turned into homegrown, virtual, run-where-you-are events. In July 2020, just after the Chicago Marathon was cancelled, we broke the record for a single day of fundraising at Team World Vision. Training went on, I reached out to you all, and you responded. In a year of heartache and struggle, you – my community – gave from your hearts. On August 28-29, I gathered locally with a few other team members in the nationwide Hood to Coast team. I ran my three legs, including a 7 mile run at 2 am, accompanied by a friend who woke up and drove out in the middle of
the night just to bike alongside me. Community. As our team pushed to collectively reach the 200-mile finish line in under 36 hours, I laced up my shoes and prepared to tap in for my last run in the heat of the August sun, exhausted from little rest and less sleep. Minutes before I took off, one more donation came in from an amazing friend, and suddenly we had hit my fundraising goal: $10,000 given for clean water in South Sudan. You all collectively changed the lives of over 200 people in one year. In the pandemic year. And the national Hood to Coast team reached a massive goal that weekend of raising over $1,000,000!

From there, because I had committed, I went on to run the would-be Chicago Marathon… 26.2 miles solo, on local streets. But I was far from alone. We called it the Pamoja Marathon – meaning “Together” in Swahili. Across the country, hundreds of Team World Vision runners hit the streets with a singular purpose, determined never to give up on our brothers and sisters with the greatest need. And my local community, my friends and family, supported me and cheered with me as I reached the finish line.

This is how community works. I don’t have the power to stop the global water crisis, but I do have the power to run and sweat and ache, to talk and write and ask. You don’t have a million dollars to give, but you give what you can, the next gives what she can, and before you know it, we’ve pulled together the resources to transform an entire region. Ubuntu. I am a world-changer because WE are world-changers.

And I am in need because the children I run for are in need. Desmond Tutu wrote that understanding Ubuntu means understanding that the individual “belongs in a greater whole and is diminished when others are humiliated or diminished.” Or to flip it around, you and I are elevated when those with the most dire need are elevated. So I keep running. This year I hope to be able to join my teammates to run Hood to Coast where it’s meant to be experienced, at Mt. Hood in Oregon. But just like last year, I’m going to run regardless. I’m going to take on the miles so that they don’t have to walk miles for water. I’m going to keep running because WE are world-changers. I'm going to call some to run with me, because I'm eager to re-enter that experience of community. And I'm going to call others – I'm going to call you – to be part of the world-changing that only a community can make a reality. Join me!

Popular posts from this blog

Bruised Not Beaten: A Berlin Retrospective

April 06, 2020
Just over a year ago, my sister Tracy ( @running4twv ) and I announced our entry into the 2019 Berlin Marathon. And last Sunday marked the 6 month anniversary of the race itself. It seems somehow impossibly distant and remarkably recent at the same time. And, aside from writing a letter to my supporters at the end of the year, I have really taken very little time to reflect on the experience. Probably to an unhealthy degree. Because if I'm honest with myself, Berlin nearly got the best of me. That's hard for me to grapple with. I had a great training season. The Summer was mild, I wasn't really pushing for a pace goal - instead I was really enjoying running with friends and family. And yet, my long runs continued to improve and I was feeling great! For the first time since I started running, I got into the rhythm of hitting negative splits, sometimes managing to put in a final 2-3 miles that would get me winded in a 10k. I found that I really enjoyed the feeling of kee
Post a Comment
Read more

June 23, 2019
It's probably fairly safe to say that if you've gotten so far as to open my blog, you likely have an idea of why Child Sponsorship is important. You may know some of the facts, or you're just generally aware of the vast disparities in quality of life around the globe.  You may even have some internal gnawing that nudges you toward action. If that's the case, then I don't need to tell you the statistics and logistics of Child Sponsorship . I don't need to tell you why you  should sponsor a child. What I do feel an need to share is why my family  has chosen to sponsor children. I make this distinction because Child Sponsorship is a commitment that people often enter into for very personal and important reasons. Though the what  and the how  are similar, the why  is unique to you. And to us. At the core, my wife and I sponsor two little boys, Victor and Omar, because we couldn't justify reserving the blessings in our lives for ourselves.  When
Post a Comment
Read more

It Starts with a Spark

August 19, 2019
How much power is in a spark? There are many, many things that you can Google and get the answer you need within seconds, but I had to do a ridiculous amount of searching and math to get a halfway respectable answer to this question. But let's err on the high end and say that a particularly large and hot steel spark can represent up to 11 joules of energy. It just so happens that 11 joules could power an energy-efficient 10 watt LED light bulb (a typical lamp) for just over 1 second, if I did my math correctly.* There's nothing terribly powerful about turning on a lamp for 1 second. Not much can be done in the darkness with 1 second of lamp light. But in 2018, a rancher in California hammering a metal stake struck a single blow that produced a single spark that ignited a patch of grass that spread to a tree that spread to a forest and became the largest wildfire in California history. By the end, this fire had burned for over 100 days and covered 640 square miles. And (h
Post a Comment
Read more

If I can't wear my heart on my sleeve, I'll wear it on my back. Every step I run this season is dedicated to a kid who needs a sponsor. A kid who needs friendship. A kid who needs hope. So I will be carrying them with me through the heat and the sweat and the miles. All you need to do is say "yes"! - PM me to talk about Nuradis. #todayirun #10miles #marathontraining #thatheat #somuchsweat #worthit #teamworldvision [Thanks to @al.prete.1 for the run!]